Software developer – who is it? 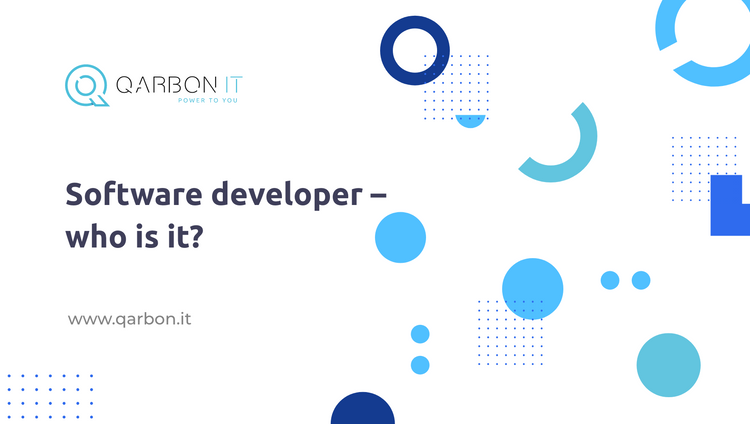 IT industry is lately one of the most prosperous ones. Every firm that wants to be something more in our times goes online and broadens its technologies. Demand for all kinds of programming services is still growing. Every firm wants to have a good-looking, well-working modern website and its own app.

Companies have become more modern and are starting to use all kinds of software. They wonder, how to find good programmers, who will meet their expectations. There is no shortage of clients on the market and because of that competition grows as well. Emerging of new software houses makes the demand for professions connected to the industry and their popularity grow. Those occupations are right now in the top paid ones. One of them is a software developer. Who is and what does a software developer do?

Who is a software developer?

When looking for a job, more and more often you can come across jobs like software developer or software engineer, additionally you will encounter words like “full-stack”,” back-end”,” front-end” and such. To a complete layman, they will not mean much. How to differentiate them and know who does what?

In this issue, there are two opinions. The first one is that programmers and software developers are not necessarily the same and they vary in the task they do.

Programmer– can code, but focuses on writing code in existing languages.

Software developer – more experienced and developed programmer. In this case, programming is only a part of his job, but his main task is creating new concepts, making tests, designing, preparing technical documentation, etc.

Another group believes that the differences between a programmer and software developer are much less considerable and those two are more or less the same.

Tests from Stack Overflow show that among those technical occupations, it is a software developer that is most wanted and most appreciated according to 71,6% of the subjects.

A lot of people use those two terms alternately because none of them has a clear definition. Sometimes it will happen that a firm, which is looking for a software developer will reject a cv from a “software engineer”. It is like this because in their company those will be two different positions.

The work of a software developer has, like every other job, its pros and cons. Here are some of them

The software developer has to have a lot of experience in programming. He has to have a wide range of knowledge. Has to know how to make a mobile or web app. Knows, what are the most popular JavaScript frameworks on the market are. It is not only coding but also a big responsibility for the whole work. A lot depends on the organization, in which a developer works and what projects is he involved in. Very often in small firms, there will be more duties for a software developer apart from writing code. In bigger companies, the distribution of tasks is much more defined, and possibly software developers will be only responsible for one part of the project, other tasks like implementation or testing will fall on someone else.

Duties of a software developer

The work of a software developer certainly is not very monotonous or boring. There is a range of things they can work on and a lot of interesting projects. It might be a mobile app, software for a company, advanced website. Fields, for which projects are created, vary a lot – maybe a boutique wants e-commerce? Maybe some company orders creating an application for comparing offers? A website is already wanted by every town hall, independent artist, drugstore, and provider of different services.

Software developers, who oversee a project, often are referred to as IT Project Managers. They are responsible for costs, progression and deadlines.

How to become a software developer?

Software developer whole his life has to broaden their knowledge, acquire new skills and climb the carrier ladder. But you have to start somewhere.

A lot of young people start their carrier by going to study It at universities. Is it worth doing so? Fluff jobs posed a question “are IT studies useful while learning to program?”, most responding programmers answered “no”. Only 17% thought, studies actually teach useful knowledge in the field of programming.

Another option is all kinds of different programming courses. A downside is high prices, which can reach as much as over a dozen thousand of PLN.

Both methods have their own advantages and disadvantages and opinion is divided. Of course, there are people that are self-taught and long studies will not do much for them, and those to whom studying at a university will be very useful. Most important is the passion to broaden your knowledge about programming. There are also those, who learned online through a multitude of different sources, online courses, bootcamps, specialized YouTube channels.

Most important is to get a hold of programming languages, acquire knowledge. It does not matter for an employer how did you got your skills but if you really have them.

Stepping into the IT industry is a big step in a carrier of a young programmer. Most of the time, there are these three basic levels in a carrier: 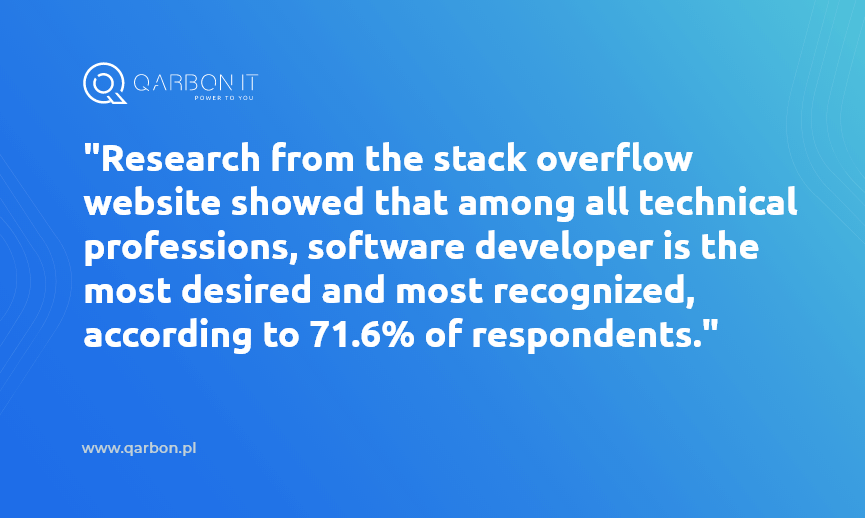 High demand – job of the future?

Software developers certainly can count on high pay above the national average. Demand for them is still growing. However, there are forecasts that suggest nothing lasts forever, and even such highly demanded occupation as a software developer will meet competition in a form of artificial intelligence. Raymond Kurzweil, head of Google engineers, said in an interview that in 17 years we will not be able to differentiate human intelligence from an artificial one. "Until the year 2029 computers will be equipped with intelligence on a human level. It will lead to the integration of computers with human-level of intelligence with our brains, next connecting them to cloud to broaden who we are". Fortunately for now these are only predictions. In the coming years, we can be sure the demand for this occupation will grow.